BERLIN: Firaz, a 22-year-old refugee from the Syrian civil war, almost drowned crossing the Mediterranean in an overloaded boat with a broken motor. “This is just a business for these people,” he says of the smugglers … 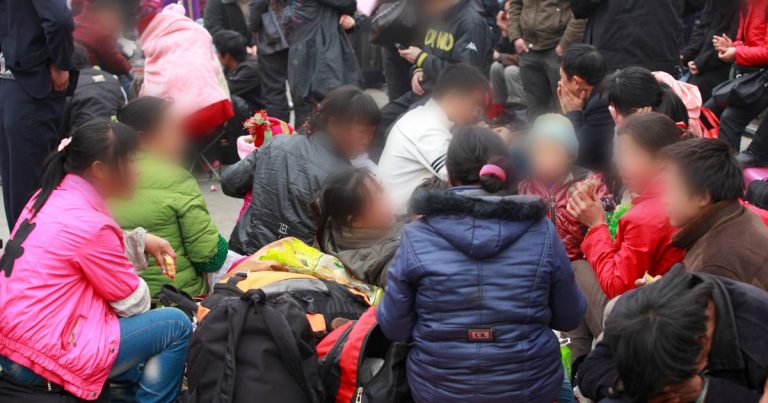 BERLIN: Firaz, a 22-year-old refugee from the Syrian civil war, almost drowned crossing the Mediterranean in an overloaded boat with a broken motor.

“This is just a business for these people,” he says of the smugglers who helped him leave his homeland, slip into Turkey and eventually reach Berlin.

Firaz’s journey cost him about 2,500 euros ($US2,800) and also saw him march, under the cover of darkness, from one border to another, carrying false documents provided for him.

Omar, 31, is one of the many smugglers making a living from helping people like Firaz cross the border between Syria and Turkey.

“Theoretically, it’s wrong to have a job like this, and illegal. But from a practical viewpoint I’m doing something good,” Omar says.

“I’m helping people who have been suffering for six years to get out of Syria and live in peace until this war is over.”

People smuggling, like any industry, is all about supply and demand, and experts say demand has never been higher in a world plagued by more frequent and longer lasting conflicts, oppression in all its forms, and vast economic disparity.

It is a high-profit, low-risk business, and security specialists say the vast sums of money to be made are driving its evolution into an increasingly professional industry.

It is also becoming more and more brutal, according to migration experts and the European Union’s Frontex agency, which coordinates border management for the bloc.

They say smugglers are prepared to accept that the “goods” they are transporting – men, women and children – may die of thirst, or drown; and that women and young girls will be raped.

The International Organization for Migration (IOM) has calculated that at least 60,000 migrants have died or disappeared while fleeing their countries since the year 2000.

Deaths continue to rise in many regions, with the UN-related body saying 20,000 have perished since January 2014, but it points out that improved data collection may account for some of that rise.

Not all deaths that occur during migration journeys can be linked to people smuggling activities, but a vast number are.

So far this year, the IOM’s Missing Migrants Project has documented more than 2,100 deaths worldwide during people’s migration journeys.

The world’s deadliest route is the Mediterranean, linking the African continent with Europe. But it appears to have become even more deadly despite migrant numbers dropping off.

So far this year there have been more than 1500 deaths recorded on the crossing, roughly matching the figure for the same period last year.

Experts say many migrants understand the risks they take when they turn to smugglers who trade on human misery. They have heard the stories of migrants who are deceived, of those who are diverted into the sex industry or other forms of forced labour.

But desperation drives them on regardless.

Shelok is a 30-year-old Nigerian woman who left her two children with her mother to seek her fortune in Europe.

She asked an old woman in her home village for help to leave, but soon found herself being forced to work as a prostitute in a Nigerian town to pay off the costs of her departure.

After some time she managed to escape the group that was holding her but soon turned to another group of smugglers to leave her homeland.

They took her across the Sahara to the Mediterranean coast on a journey that lasted more than a month. But when Shelok finally got on a boat, it was intercepted by the coastguard soon after it set off.

Now she languishes in a camp on the outskirts of the Libyan capital, Tripoli, fearful that her money and suffering have been for nothing.

What the future holds for Shelok does not matter to her smugglers. They have already cashed in on her.

Frank Laczko, the director of the IOM Global Migration Data Analysis Centre in Berlin, estimates that people smuggling networks turn over about $US10 billion (8.9 billion euros) worldwide, each year.

“It could be even more. We don’t have secure data,” he says.

In Asia, the trade is estimated to be worth $US2 billion (1.8 billion euros), according to the UN Office on Drugs and Crime (UNODC).

German security sources believe the profit margin for smugglers is high at 70 to 80 per cent, and possibly more.

Payments are made largely in cash, or via the informal Hawala transfer system that operates through agents on the basis of trust.

Europol and other police agencies say money laundering and couriers making large cross-border cash deliveries are part of the system. The cash is then moved into businesses in the legitimate economy, making money trails difficult if not impossible to follow.

Investigators must also contend with migrants who refuse to divulge what they know about their smugglers, even in cases where they’ve been abused. In some cases, that’s because migrants hope to use their smugglers again, to bring relatives over.

As more people leave their homelands, in search of refuge or more prosperous economic futures, a common response among destination countries has been to ramp up border protection efforts, but there is a growing consensus that this only feeding demand for smuggling services.

Strengthened border controls only mean “more and more people are relying on facilitators,” according to Demetrios Papademetriou, from the Migration Policy Institute (MPI) in Washington.

“Smuggling has become a booming business as a result of demand,” he says.

Europol’s Robert Crepinko agrees the smuggling industry is in a dramatic phase of expansion.

“There has never been a bigger market for human trafficking than in the past two years,” says Crepinko, who heads Europol’s European Migrant Smuggling Centre (EMSC). He says 9 out of 10 refugees rely on criminals during their journeys to Europe.

The figure for Chinese migrants heading to Canada is said to be similar.

And about 80 per cent of the up to three million people living illegally in both Malaysia and Thailand paid smugglers and other criminals.

Strong demand for smuggling services is being driven by war, violence oppression and vast economic disparity.

Experts in illegal migration say a full menu of smuggling services is on offer for people who want to move illegally.

For example a complete set of documents for those intending to reach Europe – including fake driver’s licences and birth certificates, can cost between $US5,600 and $US11,200 (5,000 to 10,000 euros)

Crossing the border from Mosul in northern Iraq to Turkey cost up to $US1,500 last year.

The richest migrants with the most money to spend can avoid the kind of perils the poorest migrants face on often deadly sea and land voyages.

Those with money can, for example, pay $US20,000 (17,900 euros) to sail by yacht from Turkey to Italy, armed with fake travel documents and an entire falsified life history.

“There are huge sums of money involved in this business. It is a relatively easy business to get into,” Laczko, from the IOM, says.

“And it is a business where you try to maximize your profits.”

In Mexico, the IOM says, ruthless criminal gangs are heavily involved in smuggling people in the United States.

Migrants in lawless Libya report being forced, at gunpoint, onto boats in numbers that almost guarantee they will sink in the Mediterranean – 150 souls on vessels designed to carry a fraction of that number.

“What policy makers in Europe and around the world would like to do is to make it a high-risk and low-reward business. But they haven’t been able to do that successfully,” Laczko says.

Instead, politicians have become bogged down in debate about whether individual EU countries should be working to protect their own borders, or should be more focused on defending the bloc’s regional border as a whole.

As that debate rolls on, security experts warn smugglers in Africa are now actively advertising their services to drum up more business, something that’s also being seen in other regions.

“The smugglers are now seeking out their own customers. They go to them and publicize their services through Facebook and other social media,” Laczko says.

The smuggling industry is still dominated by loosely organised networks of people, each with a specific job to do: recruiters, drivers, boat crews, accommodation providers, document counterfeiters and the like.

But there is also evidence that the smuggling industry is becoming increasingly professional, albeit with the help of individual operators in border towns and collection points who offer local knowledge.

In a joint report last year, Interpol and Europol investigators warned about the creation of people smuggling “oligopolies,” with larger networks taking over smaller opportunistic ones.

These trends may also be emerging in Turkey, Egypt and Libya, and there is some evidence to suggest organised crime groups who have historically smuggled drugs and weapons are attracted to the vast profits on offer from shipping cargoes of human beings.

Experts also agree that corruption is fuelling the people smuggling. In many regions, such as central America and Africa, corrupt officials are essential cogs in the trade.

Border guards are paid to look the other way. Embassy officials provide fake passports. Threatening letters, purportedly from the Taliban, are used by migrants to argue the case for entry to Europe.

Authorities tasked with trying to disrupt the smuggling trade complain they are hampered by a lack of intelligence and data, a lack of international cooperation, and an absence of concern in the countries migrants are leaving – the very places where the smugglers are most entrenched.

But there are efforts to resolve some of those problems.

This is growing consensus that Europe’s refugee crisis of 2015, which involved more than one million arrivals, is unlikely to be a one-off event.

And the EU is talking again, with renewed vigour, about the inadequate policing of Libya’s coastline, and the pressing need to secure the block’s southern border.

Austria’s Foreign Minister Sebastian Kurz says the only way to diminish the trade is to starve smugglers of customers and suggests Europe follow Australia’s lead.

Australia has vowed that anyone who tries to reach the country illegally by boat will never be resettled there.

Australia also uses its navy to turn smuggling boats back at sea, and anyone who has reached Australia by boat in recent years has been sent to detention centres in third countries. The result has been that smugglers boats are no longer leaving Southeast Asia bound for Australia.

Kurz sees some potential solutions in what Australia has done.

“The only solution to starve the traffickers of business and to end the dying in the Mediterranean is to make sure that anyone who makes his way illegally does not arrive in central Europe,” he says.

In Africa, attitudes are changing in some states.

Politicians are beginning to see illegal migration as not only a problem for the countries of destination, and police and prosecutors are pursuing smugglers with greater vigour. For example, Niger has threatened to jail smugglers for 30 years.

There’s also global acceptance of the need to better manage the inevitable mass movement of people.

At last year’s UN General Assembly, member states agreed to cooperate on a drawing up a new compact for safer, more orderly and regular migration, with negotiations to come to a head early next year, when they must agree to a set of recommendations.

More from this author

An industry built on human misery

Rohingya misery a boon for smugglers